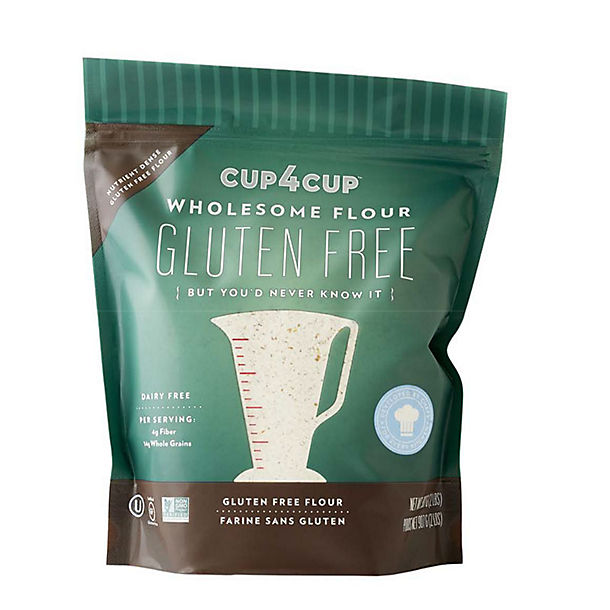 chevron_left Previous chevron_right Next zoom_in Hover over image to zoom

£2.99
This product has been discontinued.

We’re delighted our Food Team has found this ultra-reliable Gluten-Free Wholesome Flour from the Michelin-starred chef developers at Cup4Cup. A great source of fibre and Omega-3, it’s special because it can be used as a direct replacement for wholemeal flour in almost any type of recipe, from pies and pasties to biscuits, cakes and quick breads such as cornbread or soda bread.

Ideal for anyone who’s baking gluten-free for friends and family, this carefully blended flour mix can be used as an alternative to traditional wheat-based flour in any type of recipe, and it’s ok for vegans too – so you can bake your own family favourites, dinner party dishes and wholesome cakes, cookies and puddings in complete confidence. Unlike most gluten-free flours this blend has been created by chefs from a restaurant with three Michelin stars and ‘tested’ on their most demanding clientele – very reassuring – especially if you haven’t baked gluten-free before.

A blend of brown rice flour, white rice flour, ground golden flaxseed, rice bran and xanthan gum, this multipurpose flour is made with non-GMO ingredients and, as well as being gluten-free, is certified dairy-free and kosher.

Chef’s tip: just as you would with traditional wholemeal flour, don’t forget to add a little more liquid or fat when using Cup4Cup Wholesome Flour in your baking.

About the origins of Cup4Cup

The first Cup4Cup flour mix was developed in 2010 by chefs at legendary California restaurant, The French Laundry. Founded by Thomas Keller and holding 3 Michelin stars, the French Laundry’s chefs were determined to be able to offer exactly the same dining experience to all their customers – even those who needed to avoid gluten. So, being unable to find any truly reliable, pre-prepared gluten free flours, they created their own, testing it again and again to be sure it was a genuine, cup-for-cup replacement for wheat flour. Because, as Thomas Keller says, “Giving up gluten doesn’t mean giving up the foods you’ve always loved.”