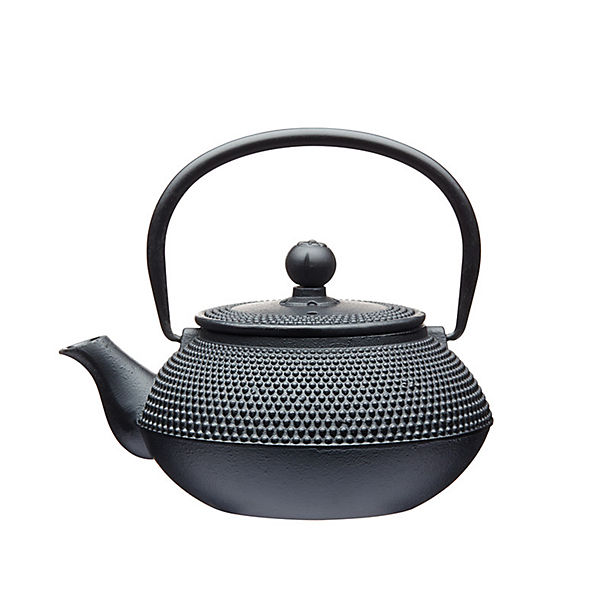 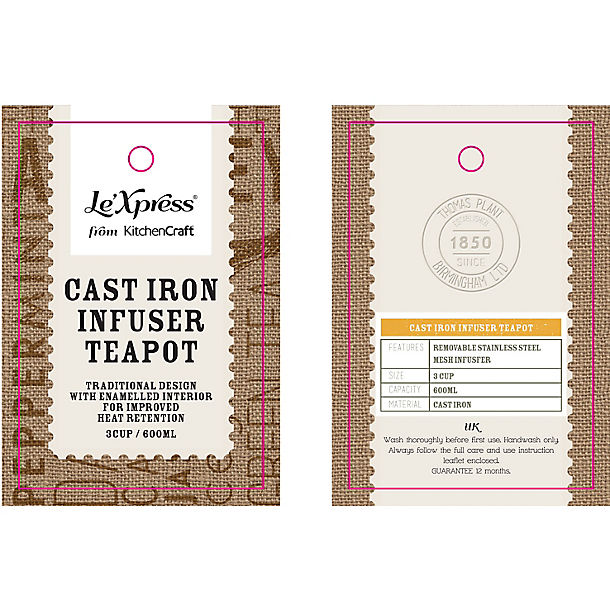 £32.99
close This product is currently unavailable.

A good cup of tea deserves a handsome teapot and this textured black Le’Xpress Cast Iron Infuser Teapot will definitely fit the bill. Beautifully made from characterful cast iron, the inside is enamelled to help insulate it and make it easier to clean, and it comes complete with a removable stainless steel mesh infuser cup so that you’ll never have to worry about loose tea leaves bunging up the spout.

Ideal for exotic oriental teas, herbal infusions and delicate green teas, its eastern-inspired good looks make it a conversation piece on any tea tray – but it won’t mind a bit if you use it for English breakfast tea or even a mug or two of builders’ brew.

A high-quality, go-to brand for steaming hot beverages, Le’Xpress has been created to make, serve and store that all important pick-you-up brew – in style! Whether you feel the need for a shot of caffeine, a calming pot of tea, soothing herbal tea, or comforting mug of steaming hot chocolate, Le’Xpress will have the perfect answer to suit.

Founded in 1787 by Thomas Plant, the company began as brush makers. They moved to Birmingham in 1850 to take advantage of the new technology of the Industrial Revolution and became manufacturers of ironmongery, expanding into kitchen essentials and household items until, by 1985, they were specialising purely in kitchenware. In 1996 the company name was changed to Kitchen Craft to help customers understand the brand and its position as a worldwide market leader in kitchenware and tableware. They’ve developed many famous core brands, each with their own personalities, offering an unparalleled choice of cooking, baking and food preparation tools as well as serving items and gifts that are instantly recognisable for their quality, and yet manage to be affordable. The company is still proud to be based in Birmingham, although Thomas Plant might not recognise their modern, 21st century premises.

This item is despatched directly from our trusted supplier so please allow up to 7 working days for delivery.

Please note that it is not eligible for our Express delivery service or available for delivery outside the UK mainland (it cannot be sent to the Channel Islands, Isle of Man, Highlands & Islands or any other countries outside the UK).

More information on our delivery & returns