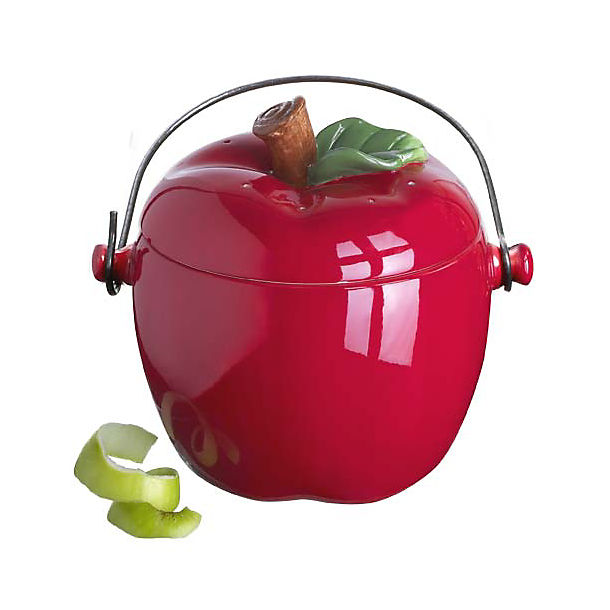 £9.99
This product has been discontinued.

Cor! Who could resist this rosy red Apple Compost Crock, which will not only brighten any kitchen, but helpfully stor… View full product description

Cor! Who could resist this rosy red Apple Compost Crock, which will not only brighten any kitchen, but helpfully stores your kitchen scraps until they're ready to be taken outside. An activated carbon filter inside the lid keeps things smelling fresh.

We have been piling the peels and scraps in empty plastic tubs, and it all just got so out of hand. This lovely red apple is such a happy addition to our kitchen and makes me smile every day. It is spacious with a lid that stops the stink. What a refreshing idea!

I received the apple compost crock for christmas and i absolutely love it!!!!!! It looks so elegant in my kitchen, rather than having a plastic unattractive container!!! Although i am now a bit gutted, as today, the lid managed to slip out of my fingers and unfortunately smashed it :-( I was wondering whether i could purchase the lid separately? So i could yet again us my lovely compost crock?

Thanks for taking the time to write your review. Regarding the purchasing of spare lids we do have these available and can be purchased through Mail Order.

What a joy it is! I have used the plastic bin before and the contents got very smelly and wet. Eventually the hinges broke. The apple is lovely - my friends wants one so I'm buying it for her for Christmas. Happy Christmas everyone!

This is just the prettiest compost container ever !! This beats any compost container I have ever seen or used. Ours takes pride of place in the kitchen and one would never guess what was actually in it especially since the filters eliminate all potential odours. When I first got this there was heated discussion about whether it was too pretty for its purpose and it nearly ended up as a cookie jar or being used to put my dog's treats in, but sense prevailed and it is both easy to use and to clean. It takes about 5 days leftovers for 2 people so you certainly don't have to keep emptying it. I have already bought 2 more as presents. I just love it !!!

I have owned the Peely Bin and the White Compost Crock and had problems with both. I decided to try this crock as a replacement and am satisfied overall with the item in use.The item is decorative, although it is actually slightly bulkier in looks than the image suggested (to me) that it would be. It occupies more space than the peely bin or white compost crock because of the larger diameter of the base and this is emphasised by the fact that the handle hangs down and touches the work surface more than an inch in front of the base, which I found detracted from the appearance of the item.I am not keen on the handle, even though it fits well onto the base, simply because of the extra space it uses on the work surface. I prefer using the crock without the handle and just take care emptying it.I am not convinced by the filter in the lid as it gets mouldy if scraps touch it and, if your bin gets used as much as mine does, then it will tend to be emptied often and not accumulate any odours. The greatest advantage this crock has over the others in the Lakeland range is that it has a better usable capacity. It has the biggest diameter of the lot and that means it copes with bulkier items such as leeks without needing to be immediately emptied. In summary, the item looks nice and decorative on your work surface and it is not immediately obvious what its function is. The handle fits well and did not fall off in use although I have removed mine as I prefer the looks of the item without it.