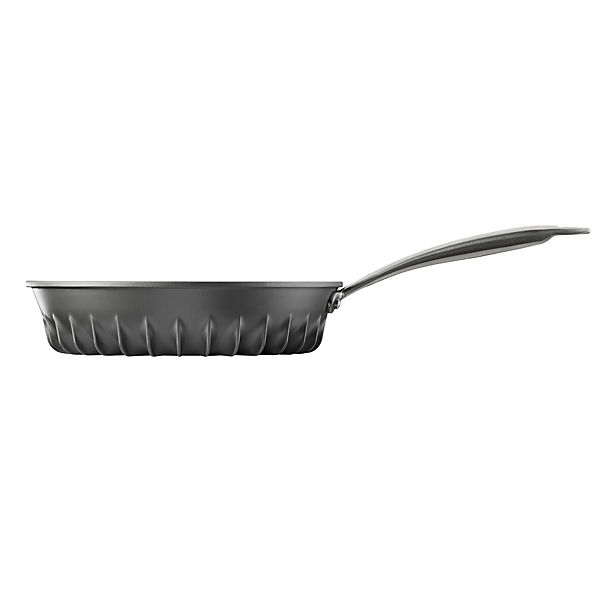 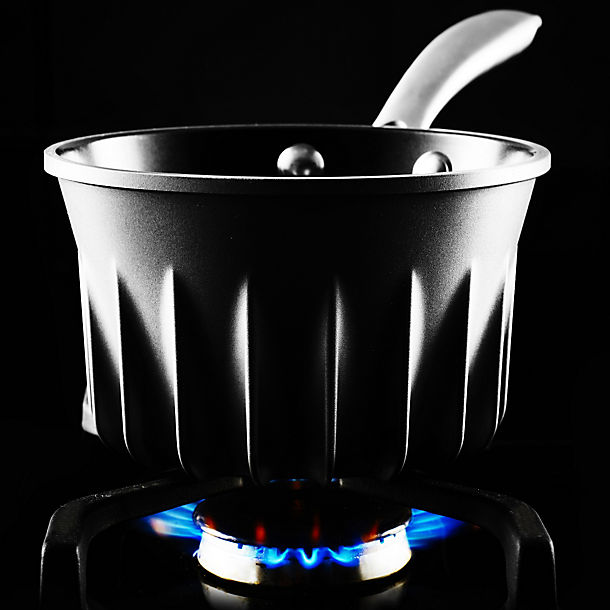 £5.00
This product has been discontinued.
error_outline Please note: this bundle will arrive in more than one delivery.

A world first, Flare® pans have been developed using breakthrough FIN-X technology in conjunction with a real-life rocket scientist at Oxford University. His usual field of expertise is that of thermo-dynamics applied to advanced jet engines, so it’s easy to see where his inspiration came from!

Developed to be exceptionally effective on a gas hob*, the uniquely designed, high-performance fins channel heat from the flame across the bottom, driving it up the sides of the pan, resulting in super efficient, incredibly even heat distribution. This means the pans heat up significantly quicker so food cooks faster, saving you time and using less energy too – in fact, in tests performed by Oxford University, an equivalent pan without the special fin design was shown to need 40% more energy to heat up than a Flare pan.

But as you know, here at Lakeland we’re sticklers for testing too! So they’ve also been given a thorough trial by our Buyer, Veronica who made a big stockpot of her trademark chilli. She found the Flare pan achieved an even, low simmer that remained consistent throughout cooking, making it easier to avoid messy boil-overs and prevent food catching on the bottom of the pan. It also cooked her dinner far quicker than usual much to the delight of her family!

*Flare pans are specifically designed to be extremely efficient on gas hobs. When used on electric, ceramic and halogen hobs, the pan won’t heat faster but will still heat incredibly evenly for better cooking results. Oven safe up to 205°C.

I have bought both frying pans and find them very good. The heating up is quick and even. I have not, so far, had any problems with the surface which cooks evenly and washes easily.

I bought the frying pan in January 2015, was so pleased with it I bought the saucepans as well, but now the non stick has worn away from the middle of the pan. Its less than a year old and not had excessive use as I don't fry an awful lot these days, really disappointed Lakeland. Next time I will wait for more reviews rather than buy some 'new out'. Expensive lesson.

Thanks for the feedback you've given on the frying pan. I'll pass your comments to the buying team and be in touch shortly.

I wanted to like this pan, both because of the technology and the amount I'd paid. However, it is far from being my favourite. The difference in heat seems marginal, the non stick covering doesn't extend to the rim of the pan (which means it looks dirty a lot) and the surface area is quite small because of the curved shape. I have the Swift Griddle pan which I love and a Colourful Ceramica milk pan, which is fab - wish I'd bought the Ceramica frying pan instead!

Thanks for taking the time to give us your feedback. I'm sorry that you'd been a little disappointed with the performance, I'll be in touch shortly to help.

Bought this pan and the 20cm saucepan just after Christmas and at first found them to be fantastic. The saucepan in particular heats up super fast. The frypan can only really take 2 slices of bacon at a time so not good if you want a fry up style pan! Now the coating is coming off of both pans around the edges so wont last much longer. Not good for the amount of money they cost!

Thanks for the feedback. I'm sorry to hear of the problem you'd had I'll be in touch shortly to help.

I am really happy with this pan. It is well balanced, a sensible weight, easy to clean, and it actually does seem to cook faster with a very even heat.