Free standard delivery, on orders over £50 >

Don't get our vouchers? Sign up to myLakeland now > 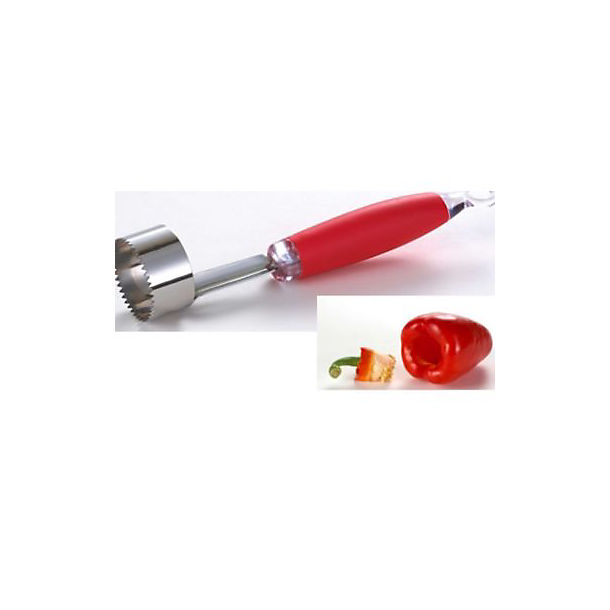 Prepare the neatest peppers ready for stuffing. Just push in the serrated stainless steel corer, twist, and then simply lift out the core and pith. With a soft-touch handle.

I was disappointed with this corer. It does do what it says but isn't very sturdy and mine broke the second time I used it!!

Thanks for placing your review and for taking the time to talk on the phone. I'm sorry this item turned out to be faulty and I'm glad this has now been resolved

I'm surprised these are reduced and won't be on sale in the future. I can thoroughly recommend them - they take the top out of a pepper so easily and make it so easy to stuff them - if you like stuffed peppers, buy one of these while you can.

"A waste of time"

I totally agree with all of Emma's review. I wish I had read it before buying the product; I'm not surprised it's ended up in the SALE. I'll give it to charity and carry on using Lakeland's (excellent) tomato knife instead.

Thanks for placing your review. I'll be in touch to help

Before finding this product in your Witney shop, I did not know it existed and was delighted to see it. I don't make stuffed peppers but use them, chopped up, in a mince and vegetable dish. The core was always a pain to remove and the seeds went everywhere; I was finding them days later, hiding in crannies! My one complaint about the corer was how hard it was to separate it from its backing card - my scissors were not strong enough to cut through the plastic bands and I eventually used garden secateurs!

"Disappointed with a potentially handy tool"

I dislike deseeding and removing the core of peppers because the seeds get everywhere so I was pleased to see a potential solution to this. However, I found the corer created just as much mess and took just as long to use, as if I was using a knife. Either pushing or twisting the corer into the pepper seems to just push the core deeper inside. The core is then not removed cleanly when the corer is pulled (or consequently tugged out). The seeds fly everywhere and I have to remove the remains of the core and the seeds with a knife, detracting from the purpose of the tool.

Thanks for your valuable review, we're sorry to learn that the pepper corer hasn't met expectations. We'll contact you very soon to help put things right.